It’s pretty hard to walk the earth and never hear of “Pokemon.” These pocket monsters have been going strong since 1995, with new TV series and video games popping up every few years. As a 90’s kid, I remember owning some of Indigo League on VHS and eagerly awaiting the release of the Pokemon movies. My favorite starter was Bulbasaur but Eevee was my overall favorite. The video games weren’t as big of a draw for me, but you bet I was among the millions of fans excited for the release of Pokemon Go a few years ago.

I think a good test to see how well Pokemon has stood up has been the number of requests for fandom items I’ve received since I started crocheting 10+ years ago.  One of my bad habits is documenting my finished projects- and it was particularly bad early on. I’ve managed to find a few that I made in high school, but I know that I’m missing pictures of my brother’s Pikachu and a number of Pokeballs.

Fair warning: A lot of these pictures are kinda rough and a few are a little before I really mastered stuffing. No judgement please. ❤ I have also included a link to the free pattern I used so you can make your own!

I want to say that Drifloon was the first Pokemon that I made. It was my junior year of high school. I was in the Language Club and our president was going to be graduating that year. This ghost type was one of their favorites at the time, so I thought it would make a fitting graduation present. I paired it with a Pokeball.

Meowth followed soon after. As you can see, this isn’t your normal Team Rocket version. The friend who requested this had something different in mind. So that’s where Myrhh’s Meowth came from. He was my first large amigurumi and I’ve learned a lot about stuffing and limb placement since then. Check out my most recent attempt.

Torchic was requested for one of my brother’s friends…..the night before the birthday party. XD Good thing I didn’t get sleepy as easily back then. However,  I know this would have turned out better if I didn’t have to bulldoze through it. I think I included a Pokeball with this one.

Up until now, you’ve probably noticed that I’ve been linking WolfDreamer’s patterns A LOT. And what can I say except that her patterns are some of the best and most varied ones out there. She also provides other video game crochet projects, so she’s basically a one stop shop. It makes me sad to go back and see she hasn’t posted since 2016. 😥 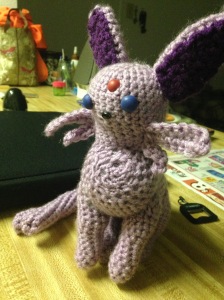 Espeon was my first non-WolfDreamer pattern. Sad, I know, but she does offer an Eevee and Umbreon pattern! I found this one on Epic Yarns, but made a few changes. I’m not much of a felt person, so I used safety eyes for the jewel and eyes. I also just crocheted the inner ears.

This was made as a part of an art trade on Simbi. In exchange for this Espeon, I received an AMAZING tattoo design from Maria Oglesby. I love her art style.   You can see the actual tattoo here on my Instagram.

The following pictures are of my favorite Pokemon project to date. For all of you Pokemon Go folk, the game released a Magikarp hat for your character to wear during the Water Festival event last March. My coworker jokingly asked for one to wear during his raids and I just had to make it.

I’m tempted to make another one for myself. Pattern is here, if you need this in your life!

I’m far from done with crocheting Pokemon. I currently live with a Pokemaster and we named our WiFi the “Pokecenter” if that gives you any ideas. So far, he’s requested a Pokeball blanket and gave me an idea to recreate Oddish, Gloom, and Vileplum into potted plants for our mantel. Check out my succulent post for a better idea of what I might do. I also want to recreate some of my older projects to continue my ThrowbackPatternThursday series.

Well until next week, readers! Keep on crafting!