It’s been awhile since I dared to show the early days of my crocheting. I wasn’t terrible, but let’s just say there’s a noted improvement. #ThrowbackThursday is admittedly my favorite feature because there are some patterns that were really fun to make. So far, I think my favorite one to redo was the Pop Tart Cat. They’re cute and easy to work up, as well as endlessly customizable. I plan to write up the pattern soon, so be sure to look for it by the end of summer!

I’m currently dating someone who loves Pokemon. While I’m a fan of the series, it’s obvious I’m way more casual about it. Anyway, since we moved in, I have thought it would be fun to turn our home into the Poke Center. It’ll be a lot of work on my end, but it gives me a lot of creative freedom. I decided to make Meowth first since we do have a cat in the apartment and I was also thinking of one that I made back in 2010.

This was for my high school friend Myrrh. As you can tell, it’s not your typical Meowth. His fur is black and gray with a blue gem. I am 99.8% sure no one else has one like this. Hmmm…..I wonder if she’s held onto this after all these years…….

I used this pattern from WolfDreamer to make both versions of Meowth. Some improvements I felt I’ve made include stuffing and sewing limbs onto the body. As you can tell, the body doesn’t seem as stretched and you can’t see stuffing. The limbs also look more even and not so alien. On my first run through of the pattern, I didn’t really understand a lot of the directions. My years of amigurmi making helped a lot this time around. 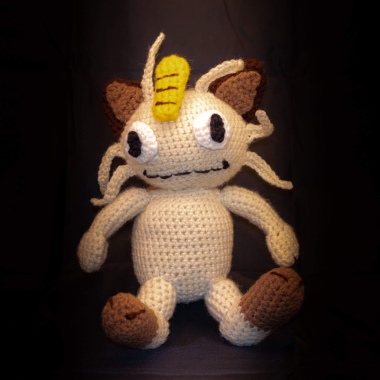 One thing that I still had problems with were the whiskers. They still won’t stand up straight like in WolfDreamers blog post. I double checked (because I have the bad habit of skimming), but didn’t see any special instructions. I even tried crocheting tighter to see if that would fix the issue. Does anyone have an idea of what I can do to fix these curly whiskers?

All in all, I’m really happy to display this Meowth in our home. I plan to put it on top of Sirius’s cat tree since she never jumps up there.

What Pokemon do you think I should do next? Austyn is rooting for a potted Oddish, so we’ll see about that.

Till next time- Keep on crafting!