Happy Tuesday, everyone- depending on where you are located.

It’s a pretty dismal day in my neck of Texas. Rain since the early hours and a chill that makes me want to turn and run back inside. A perfect day to release a crochet hat pattern, right?

I’m about a week behind on my promise, so I want to apologize. The recent weather and work have zapped me of my creativity and willingness to do pretty much anything. But no more excuses! Today the pattern will be available to all!

As I mentioned a few times on  the blog, my boyfriend Austyn LOVES Pokemon. He has pretty much every video game that has been released, has a binder full of cards, and is eagerly anticipating the upcoming games for the Nintendo Switch. He requested a Shiny!Mimikyu hat after I made the Magikarp hat for my coworker, Ryan.

“Mimikyu is a small Pokémon whose body is almost entirely hidden under a rag. Its beady black eyes are visible through holes in the body of its disguise, and the fringe of an amorphous foot or lower body appears to be visible under the hem of its rag. Occasionally, it will also extend a black appendage from under its rag. The veil itself resembles a Pikachu. The cloth is yellow with black tipped ears. The Pikachu face appears to be drawn with crayons, consisting of black eyes, red cheeks, and a squiggly black mouth. Mimikyu also carries a small stick resembling a lightning bolt to create a tail for its costume. When its disguise is damaged, the costume’s head droops limply backwards, revealing Mimikyu’s ruse. Larger rips in the costume are accompanied by shadowy vapors pouring out from whatever is hidden within.”- Bulbapedia

This hat is simple enough for the beginning crocheter. It starts off with a basic beanie pattern and then you add on all the extras. I don’t write a lot of my own patterns down, so please let me know if you have any difficulties making this. 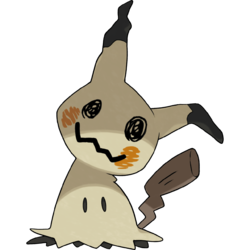 This hat was made to fit an adult male. This pattern is worked to be 24″ in circumference.

Do not tie off.

The ragged edges around the bottom of the hat are two rows of triangles made in Dove and Dark Grey.

R2 is worked the same as R1, but in A2 (dark grey) and in the back loop of R26 of the hat. I started in a different stitch of R26 for this row, so that the Dark Grey triangles peek through the row of Dove triangles. see photo below. 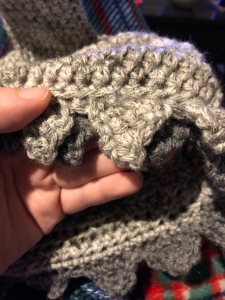 After you’re done with the base, feel free to design the face. As quoted above, the “Pikachu” face appears to be drawn with crayons, consisting of black eyes, red cheeks, and a squiggly black mouth. 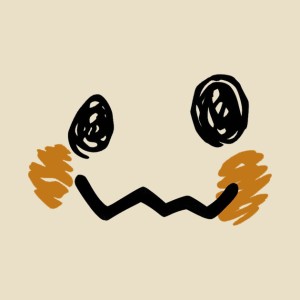 I’m not a great embroidery person, so this was perfect for me. I took black yarn for the eyes and made spirals. Again with the black, I made a giant zigzag for the mouth. I “scribbled” the cheeks with dark grey.

Make two. Start with A1 (Black)

Change from A1 to MC

Tie off. Leave long tail for sewing. I opted to not stuff the ears. Instead I flattened them before sewing them to the hat.

Attach the  ears to the top of the hat. I’ll admit that I used Austyn’s head to help with ear placement, since he didn’t want them to stick up.  If you do not stuff the ears, they will lay down a bit. Stuffing them will probably help them look a little perkier. 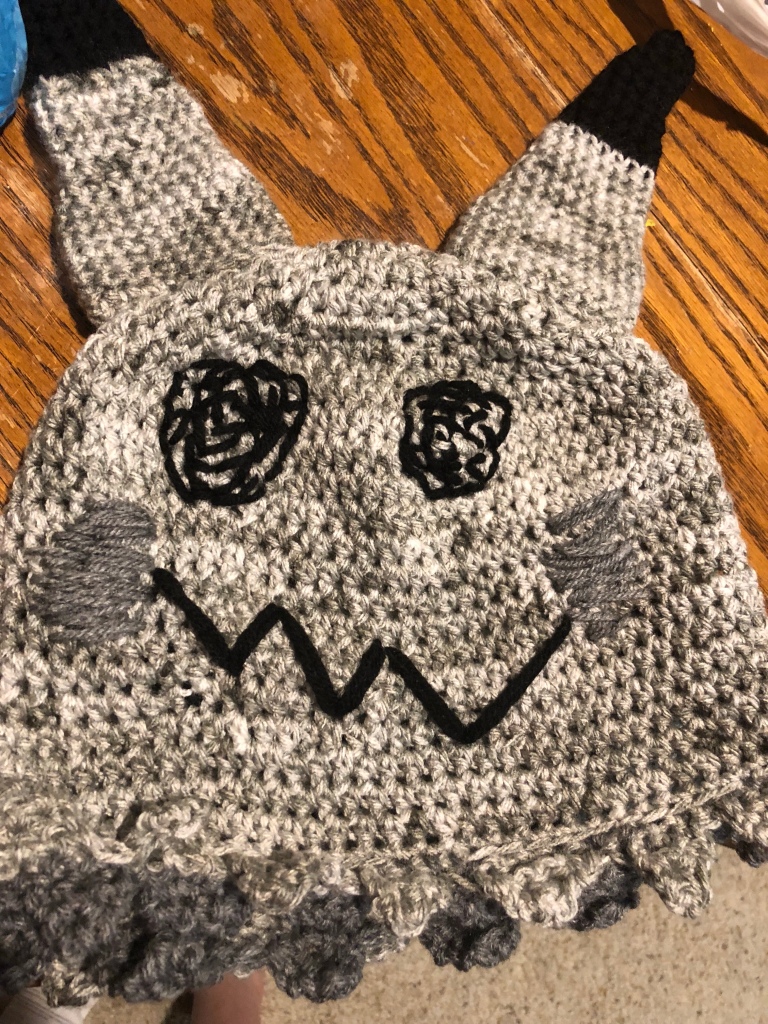 Here is what  your finished Mimikyuu will look like. I’m hoping to update this post later in the week with pictures of Austyn wearing his. The few I’ve already gotten were not approved for social media. ;P

Please let me know what you think of my pattern and how your project turns out! Use the hashtag #CraftyUnicorns or tag me at @xblueunicorncrafts on IG or @BlueUCraft on Twitter.

As always, keep crafting and I’ll see you next time!